In Iraq, FSD locates and neutralises improvised mines in areas previously occupied and mined by the Islamic State. In addition, FSD reinforces the capacities of the national authorities. 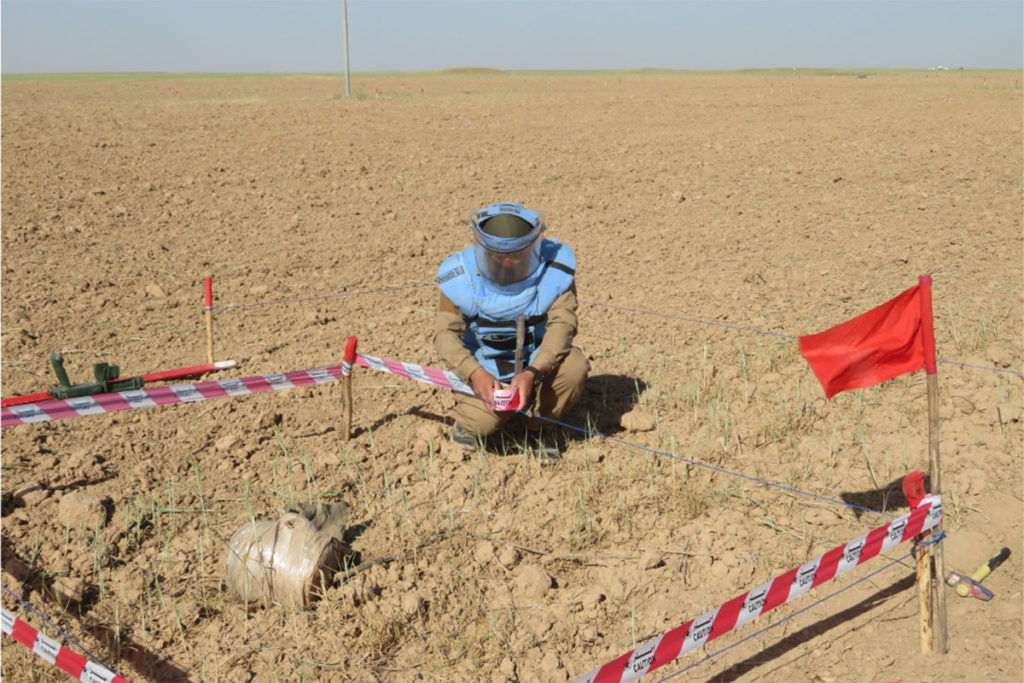 This deminer marks the location of an improvised mine, which will then be neutralised by an expert and destroyed (Iraq, 2021)

By the end of 2017, the war against the Islamic State was officially over; the jihadist group had been driven out of all the areas it had occupied since 2014. For the Iraqi population however, this did not imply an immediate return to a normal life.

Many villages are still littered with explosive devices laid by the jihadist group on roads, in fields, homes and schools. Inside buildings, these so-called “improvised mines” are sometimes hidden under furniture, in televisions or refrigerators, in doorways and windows.

In addition to these deadly devices, dangerous items of unexploded or abandoned explosive ordnance are scattered across the former battlefields.

To enable people to return to their homes, cultivate their lands and to send their children to school safely, it is essential to clear these contaminated villages and agricultural areas as soon as possible and to form Iraqi national organisations in mine action. 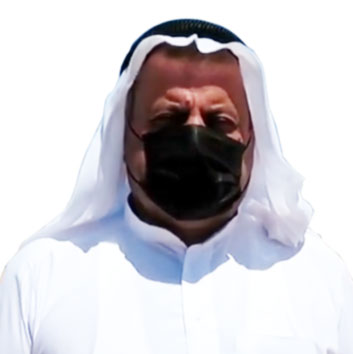 In Iraq, FSD deminers focus their efforts on eliminating improvised mines. These homemade explosive devices were manufactured by ISIS with everyday objects or products and are still littering the country in considerable quantities.

With a high quantity of explosives, each device can potentially create a deadly explosion. To date, nearly 20,000 improvised mines have been destroyed by FSD, an area equivalent to 3,000 football pitches was cleared. 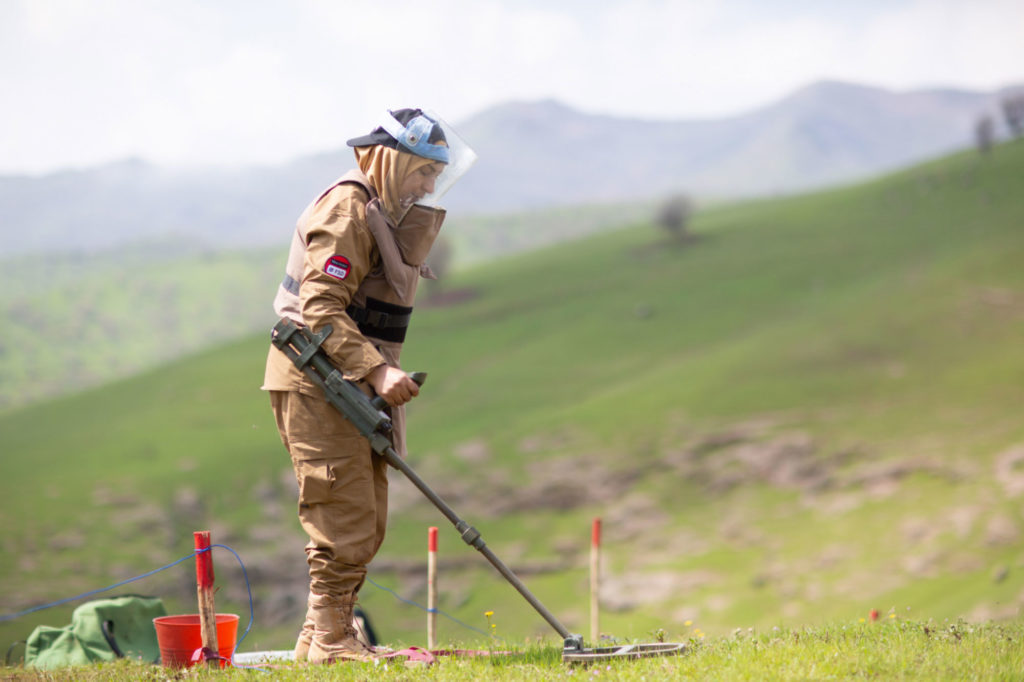 Mine clearance is a long and arduous work. In areas not cleared yet, the populations have no other choice than “living” with those explosive devices. FSD therefore conducts risk education sessions in communities still contaminated.

During these sessions, people learn to recognize the improvised mines present in the area, and to adopt the right behaviour to avoid incidents.

To date, 95,000 women, men and children were educated by FSD teams. A prevention campaign is also implemented on social media via the local FSD Facebook page. 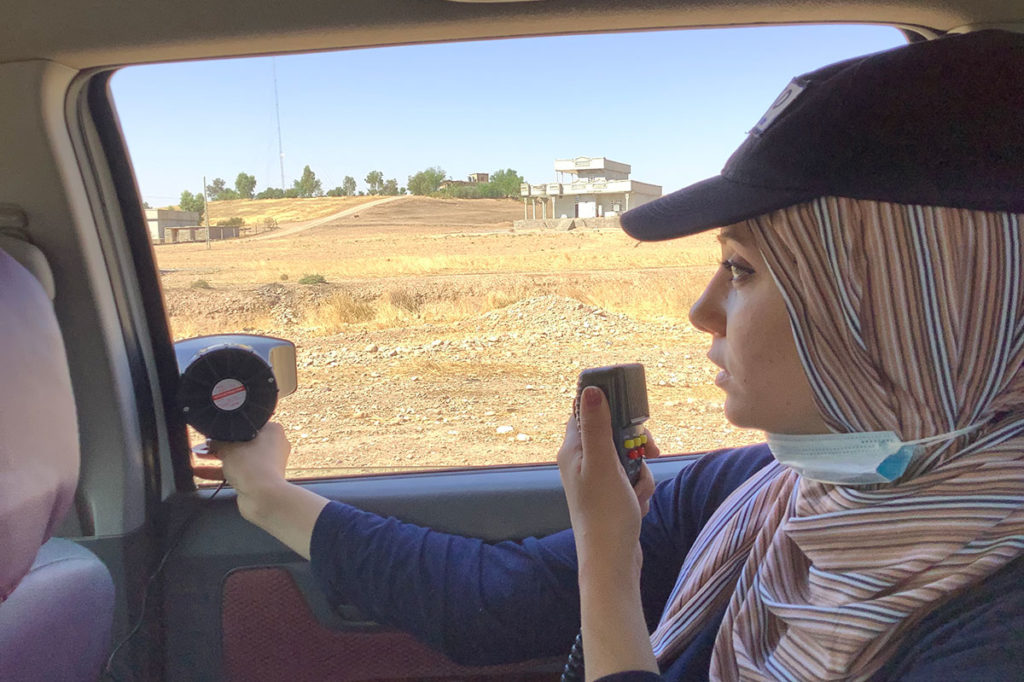 In 2020, FSD started a project to train and develop the Iraqi national capacities in mine action. FSD experts trained the staff from the local NGO SHO (Shareteah Humanitarian Organisation). Today, this organisation is able to implement demining operations in complete independence and is accredited to do so.

Ultimately, the objective is that international actors can withdraw and that the mine action activities of Iraq can be carried out by national organisations. 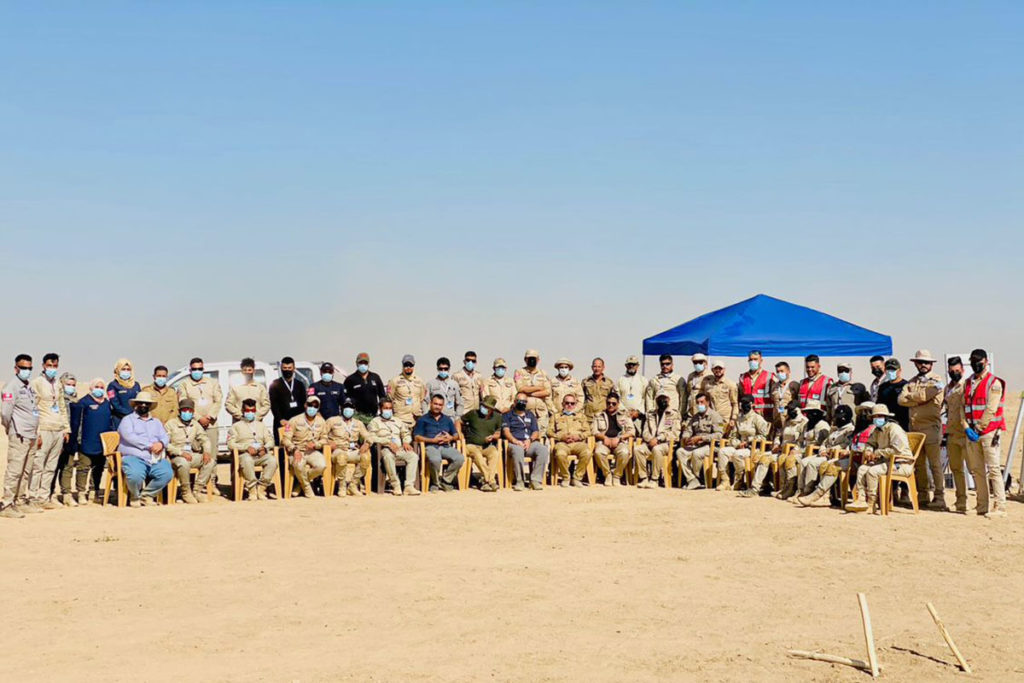 FSD began working in Iraq in 2016, when ISIS forces still occupied part of the country. Several demining teams were deployed, most of them in the Gouvernorate of Kirkuk, Erbil and Nineveh, thanks to the support of the US Department of State, the United Nations, the city of Geneva and other donors.

Demining operations in Iraq are delicate for deminers: explosive devices are present in considerable quantities, and their improvised nature can challenge the neutralisation process. Each device encountered is potentially different from the others and requires special attention. For example, some may include hidden or multiple activation switches.

The environment represent an additional challenge for deminers as well as for FSD’s risk education experts and survey teams who work in the north of the country.

The temperature of around 40 degrees Celsius for a good half of the year hardens and dries the soils posing a difficulty in the demining operations. Our teams often use mechanical means to excavate explosive devices.

The security also remains extremely fragile and infrastructures to host FSD teams close to minefields are rare because of the level of destruction caused by the combats.

The everyday life of a deminer

📹 “When I applied for this job, I didn’t tell anyone” Asmaa Khalil, leader of FSD female demining team in Iraq, proudly relates her daily life as a deminer. 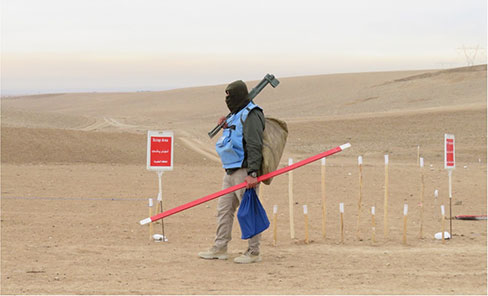 This deminer is preparing his equipment before he and his team start clearing explosive devices near a road to allow freedom of movement for local communities. 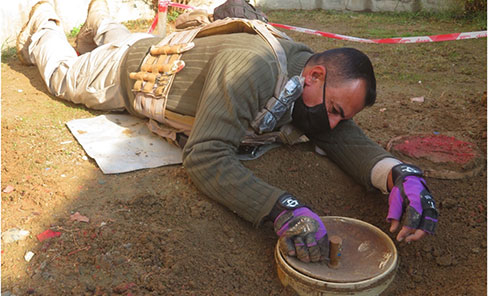 Intense focus for Jamal Jalil, a demining Supervisor for FSD in Iraq. He is here performing a practice render safe procedure of an IED. He is already familiar with this procedure […]